Posted at 17:35h in Events by Mittie Roger 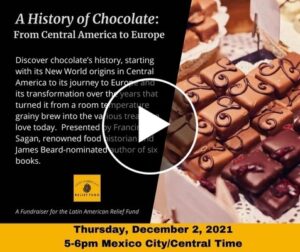 Discover chocolate’s history, starting with its New World origins in Guatemala, Honduras and other Central American countries. Learn about chocolate’s journey to Europe and its transformation over the years that turned it from a room temperature grainy brew into the various treats we love today.

Learn how chocolate goes from bean to bar as you are guided through a tasting of various types of fine chocolates and discover the many ways it can be paired with tea, coffee, beer, wine and spirits.  You’ll hear about its health benefits, aphrodisiac lore, modern innovations like bacon chocolate and more.

Each participant will receive a handout of both savory & sweet chocolate recipes.

FRANCINE SEGAN, noted food historian, is a James Beard-nominated author of six cookbooks. She co-edited Entertaining from Ancient Rome to the Superbowl, a 2-volume encyclopedia, which was a 2010 finalist for the coveted Gourmand World Cookbook Award given each year in Paris.

An expert on chocolate, Ms. Segan lectures extensively on the topic across the country and is a regular guest speaker at The Institute for Advanced Study at Princeton University, Smithsonian Museum in DC, Virginia Fine Arts Museum, Museum of Natural History in NYC, New York Chocolate Show and The New York Times Travel Show. She writes widely about chocolate and has authored several chapters of Rutgers University’s catalogue Bitter Sweet: The Chocolate Show and contributed the chapter “Italian Chocolate” for the Oxford Encyclopedia of Sweets.

She recently spent nearly a month in Central America following the chocolate making process there from harvest, to fermentation, drying and chocolate grinding.

Ms. Segan is an often-quoted food expert in publications including Wall Street Journal, USA Today, The New York Times, L.A. Times, Chicago Tribune, Vogue magazine and Scientific American. She has appeared frequently on national TV on programs such as the Today Show and CBS The Early Show. She is a regular guest on the History and Discovery Channels and the Food Network with several specials for PBS, including two on chocolate.

Join us via Zoom for this tasty online fundraiser. Proceeds benefit the humanitarian work of Albergue ABBA, a migrant shelter in central Mexico.