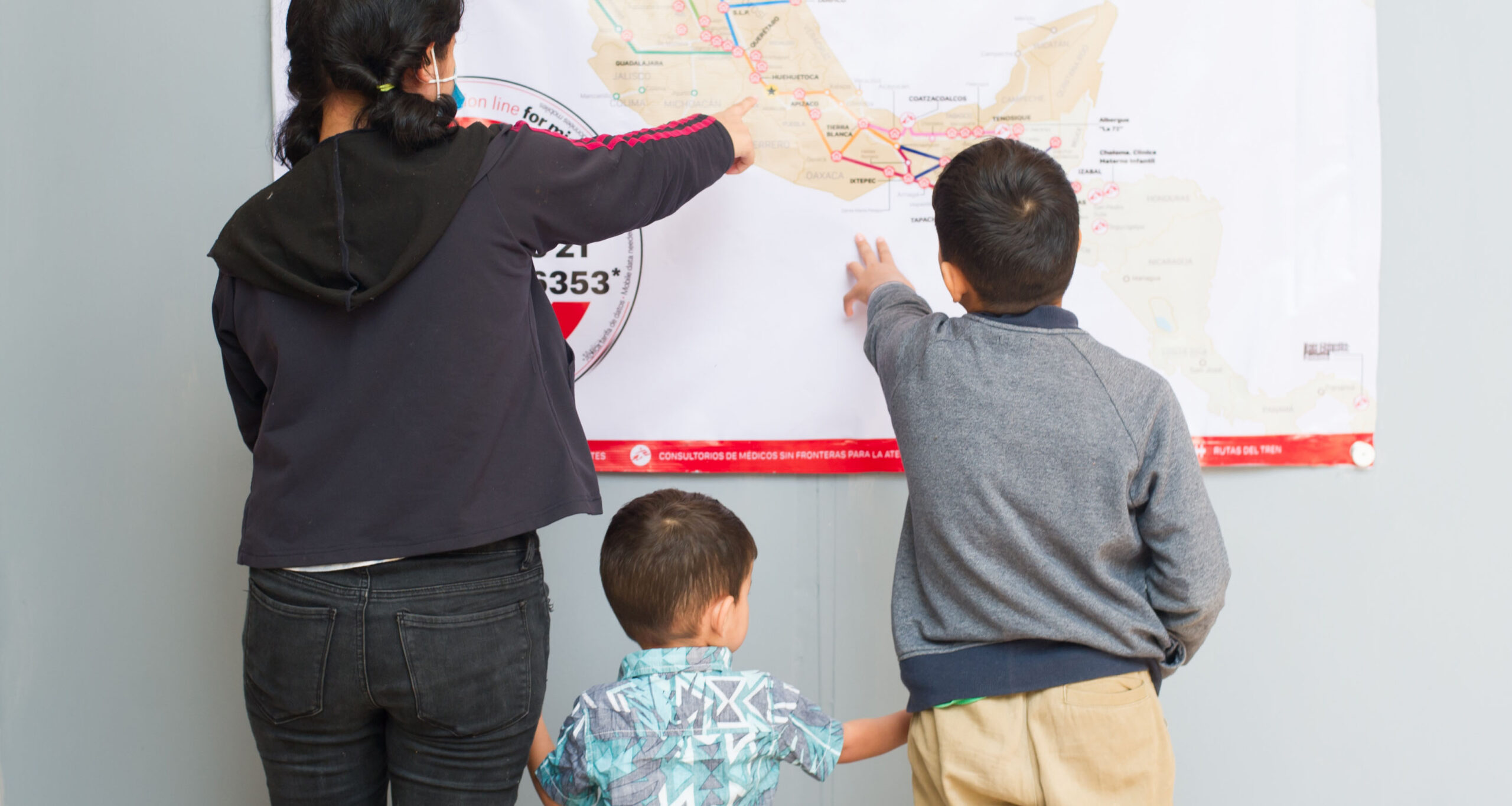 The United States should be an asylum for the persecuted lovers of civil and religious liberty.

Since its inception in 2018, The Latin American Relief Fund has raised nearly $200,000 to support migrants and refugees in Mexico. Since we have no paid staff and little overhead, 95% of the donations we receive go directly to providing services for migrants at Albergue ABBA.

The generosity of our donors has enabled us to help Pastor Ignacio purchase the building that houses ABBA and upgrade the plumbing, buy solar hot water heaters, a new van for transporting amputees to and from the hospital, and set up and run an educational program. Currently, we are fundraising to build and equip a small gymnasium for the rehabilitation of amputees at the shelter. 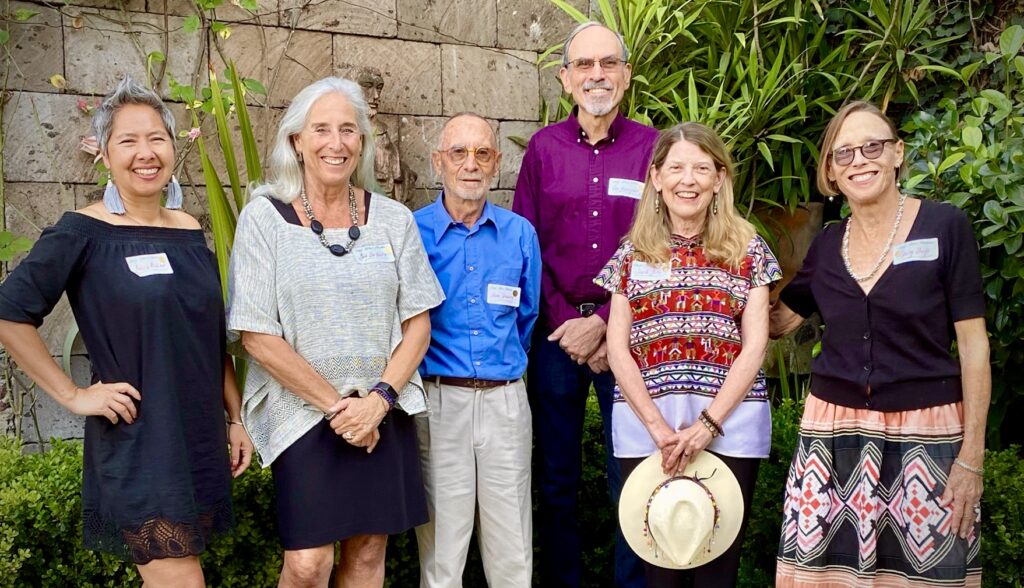 Missing from the photo is Board Member Careen Shannon. Photo by Honey Sharp Lippman.

Judith Gille was the founder and owner of City People’s, a small chain of retail stores in Seattle, but her passion is writing about Mexican art and culture and immigration issues. Her articles and essays have appeared in major newspapers, magazines, online journals and in numerous anthologies. Her memoir The View from Casa Chepitos: A Journey Beyond the Border (released by Davis Bay Press in October 2013) was the recipient of a 2014 Nautilus Award and Writer’s Digest’s Grand Prize. Gillehas a certificate in Fundraising Management from the University of Washington and has been raising money for diverse organizations for more than twenty-five years. She divides her time between the Pacific Northwest and San Miguel de Allende.

Dr. Daniel Neuspiel is child of a refugee and immigrant, and has been a lifelong advocate for migrant justice.  He attained BA and MD degrees from Rutgers University.  Dr. Neuspiel completed residency training in pediatrics at the Children’s Hospital of Pittsburgh, followed by a fellowship in epidemiology and MPH degree at the University of Pittsburgh.  He retired from a career in academic general pediatrics in New York and North Carolina in June 2017, and is Professor Emeritus of Pediatrics at Atrium Health. Upon retirement, Dr. Neuspiel and his wife moved to San Miguel de Allende.  He joined the Board of Directors of LARF in 2018, and currently serves as Vice President of LARF.

Rebecca N. Eichler has over 20 years of experience practicing immigration law in the Washington DC area and providing disaster legal aid around the world, working with clients seeking protection under U.S. & international law.  After Trump was elected and on the heels of a year-long road trip from Virginia to Panama in a VW van with her husband Paul Carlino and two young teens, her family moved to San Miguel in January 2018. She founded Language Adventure Pros providing Spanish for Lawyers courses, brews and sells Real Good Kombucha and volunteers as a human rights advocate, advising deportees from the U.S, migrants in transit, and asylum seekers at the US border.

Born in NYC, Honey Sharp grew up in the 60s in Beirut, Lebanon where she became aware of the plight of Palestinian refugees. Upon returning to the US, she graduated from Sarah Lawrence College and got an MA in cultural anthropology at Columbia University. Moving to the Berkshires, MA. she served on the board of various non-profits, including a Waldorf school, which her three children attended. Since 2010, she and her husband, David Lippman, have been living part-time in San Miguel. She joined the LARF board in 2018.

Dr. Hernán (aka Nano) Drobny was born in Santiago, Chile. He immigrated to the USA and is a naturalized citizen. He attended the University of Pennsylvania School of Medicine and specialized in Internal Medicine at the University of Michigan. He taught and practiced clinical medicine there for more than 30 years. In 2002 he started one of the first consulting practices as a patient advocate by a physician. He wrote Your Health, Your Choice (2nd edition 2017) which offers the tools to empower individuals to more effectively participate in making their own health care decisions. He lives with his wife in Ann Arbor, Michigan and San Miguel de Allende, Mexico. He joined the Board of Directors of LARF in 2020. He also is a member of the Board of Directors of the Charco del Ingenio in San Miguel.

Gail Berkowitz is a graduate of Washington University with a degree in Urban Planning; and received her J.D. from University of Missouri at Kansas City.  She recently retired from Berkowitz-Cook, a boutique law firm in Kansas City where she was a key partner specializing in Family Law for more than 30 years. She and her husband recently moved to San Miguel de Allende to live full-time.

Careen was born in California; raised mostly in New York and New Jersey; has lived in Denmark, France and Japan; and is now a part-time resident of San Miguel de Allende, Mexico. She earned her B.A. in English, French and East Asian Studies from Oberlin College, and her J.D. from the public interest-focused City University of New York (CUNY) Law School (whose motto is “Law in the Service of Human Needs”). For 30 years, she practiced immigration law in the United States, most recently as a partner in the world’s largest immigration law firm, where her focus was on pro bono management, corporate communications, thought leadership and immigration policy analysis. Careen was an Adjunct Professor of Immigration Law for more than a decade, and has authored several books and hundreds of articles on topics related to immigration and global mobility. She also serves on the Boards of two other nonprofits.

Become a donor and do your part to support migrants.

Another easy way you can help:

Designate The Latin American Relief Fund as the recipient on your Amazon Smile account.

A Brief History of LARF:

Sher and Gary Davidson founded the Latin American Relief Fund (LARF) in 2017, as a way to help caravans of Central American migrants crossing through Mexico to the U.S. border. Their first fundraising effort was a concert in Portland, where they raised the initial funds to start the organization. Soon afterward, they registered LARF in Oregon as a 501 (c) (3) tax exempt corporation. LARF’s founding board began assisting Albergue ABBA in 2018. Since then, LARF has provided regular financial assistance for the shelter’s day-to-day operations and for emergency situations caused by variations in migrant flow, including large caravans.

With your donation, we are supporting the #1 amputee rehabilitation center in the nation, along with 12,000 migrants who pass through the Albergue ABBA each year. Your contribution goes a long way to easing the difficult circumstances of these international refugees.

Will you make a decision today to do your part? Become a supporter by clicking on the button below!

Contact us at latinamericanrelieffund@gmail.com, or through the form below.